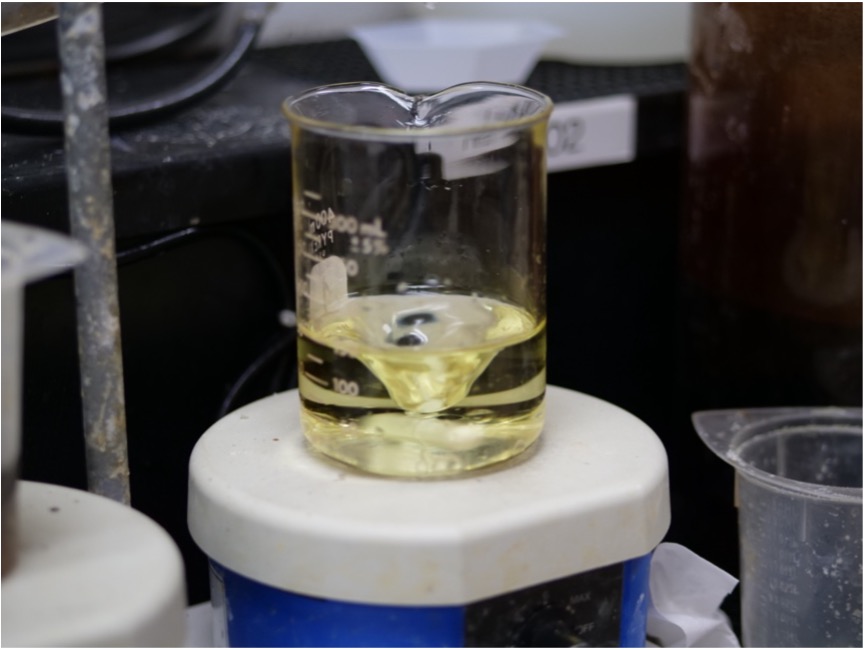 HOT SPRINGS, AR – (March 16, 2021) – U.S. Vanadium is pleased to announce that it has successfully demonstrated the ability to recycle the liquid electrolyte from a decommissioned Vanadium Redox Flow Battery (“VRFB”), a rapidly growing commercial technology that promises to enable intermittent renewable energy technologies such as solar and wind to provide power on a round-the-clock basis.

Because of their nearly unlimited energy storage capacity, high efficiency, zero emissions, very long cycle lives, and relatively low cost of available electricity on a lifecycle basis, VRFB energy storage systems are enabling consumers to utilize renewable energy systems for 100% of their actual power needs without having to rely on renewable energy credits and other accounting offsets.

Against a background of increasingly prevalent waste disposal issues faced by lithium-ion batteries, VRFBs have the important benefit of its liquid electrolyte being nearly 100% recyclable.  Vanadium electrolyte, and its ability to be recycled for continuing use, is considered to be a key advantage for the technology that is expected lead to increased worldwide adoption of VRFBs as an alternative to lithium-ion batteries.

“This technological breakthrough represents a large leap forward in realizing the revolutionary potential of vanadium redox flow battery systems,” said Mr. Smith.  “I cannot understate the importance to the power generation industry, and the future of renewable energy in general, of enabling VRFB electrolyte recycling.  U.S. Vanadium looks forward to assisting in the manufacturing and recycling of VRFB electrolyte from systems around the world.”

“Successfully recycling and restoring VRFB electrolyte presents a number of difficult technical and economic challenges,” said Mr. Woolery.  “I am very pleased with the outcome of this effort and with U.S. Vanadium’s commitment to stay on the leading edge of initiatives such as this one.”The VRFB electrolyte recycling initiative at U.S. Vanadium, where a vanadium recovery rate of 97% was achieved, was led by Mike Woolery, vanadium technologist for U.S. Vanadium and a Rensselaer Polytechnic Institute chemical engineer with over four decades of experience in the vanadium industry.  A technical paper by Mr. Woolery describing the electrolyte recycling initiative can be seen here:  https://usvanadium.com/solving-the-technical-and-economic-challenges-to-reprocessing-vrfb-electrolyte/

“VRFB systems require very high purity vanadium electrolyte to work most efficiently, including both V2O5 and V2O3,” said Terry Perles, a member of the U.S. Vanadium Board of Directors and a 32-year veteran of the vanadium industry.  “U.S. Vanadium can both produce virgin electrolyte as well as recycle electrolyte that has previously been used and building both lines of business is an important element of U.S. Vanadium’s strategic growth.”

VRFB batteries are rechargeable batteries that take advantage of the fact that vanadium ions in different oxidation states can efficiently store chemical potential energy. VRFBs allow for an almost unlimited energy capacity, can be discharged to very high percentages without damage, have very long cycle lives (at least 15,000-20,000 charge/discharge cycles), and can remain unused for long periods without permanent effects to the system.

According to a BloombergNEF study published in 2020, redox flow batteries could compete with lithium-ion batteries for up to 69 gigawatt-hours (GWh), which would be 46% of the total 150 GWh of required capacity in 2030.  Peaking and energy shifting are applications are likely to be most competitive for redox flow batteries, as shown in the figure above.

This leads to a relatively low levelized cost of energy compared to other large-scale battery systems, such as lithium-ion batteries.  VRFBs also are an effective means of providing cost-effective load balancing to large-scale electricity distribution systems.

About U.S. Vanadium LLC
U.S. Vanadium produces and sells a range of specialty vanadium chemicals, including the highest-purity vanadium pentoxide (“V2O5“) in the world, from its flagship facility in Hot Springs, Arkansas USA. The company is comprised of global leaders and investors in specialty chemicals and strategic materials, including in the mining, processing, purification, and sales and distribution of vanadium specialty chemicals.  For more information, please go here:  https://www.usvanadium.com/.